It takes more than one win for a club to gain a League title. But within a title winning season there will be crucial matches that if the desired result is achieved will go down in the memories of fans as classic games. Boston United have won ten league titles over the years, from the first one - the Central Alliance League in 1962, to the most recent - the Nationwide Conference in 2002. In this article I'm going to cover some of the York Street games in the Dr Martens Football League winning season of 1999/2000.

After being relegated from the GM Vauxhall Conference in 1993 Boston United spent five seasons in the Northern Premier League before deciding to take the opportunity of moving sideways into the Southern League in the hope of gaining the elusive top spot that would give them promotion in the days before promotion playoffs made the task slightly easier. After a poor start results eventually picked up and although never being close to catching runaway leaders Nuneaton Borough, Boston finished the season as runners-up.

The league campaign got off to a flying start as the Pilgrims recorded a 6-0 home win over Salisbury City courtesy of goals by Andrew Stanhope, Mickey Nuttell(2), Paul Wilson (pen), Colin Hoyle and Mark Rawle.

The main title rivals that season were Burton Albion. A big crowd of 2090 packed into York Street for the home game against them at the beginning of December and they witnessed a fantastic match. A well advertised "surprise" saw forgotten striker Andy Kiwomya - the brother of former Arsenal forward Chris Kiwomya - make his first appearance since coming on as a substitute in the match at Halesowen back in September. Burton took the lead on twenty three minutes when Darren Stride headed past Paul Bastock. Five minutes before half time Boston finally broke through. It was a piece of pure magic from Kiwomya. Bastock threw the ball out to him on the left wing. First he beat one defender, then moved inside to beat another. A burst of pace saw him break clear, then he drew the keeper over to him before shooting but the keeper could only parry into the path of Lee Power to tap in. The second half was all Boston. On fifty minutes they won a penalty when Goodwin brought down Lee Power. Paul Wilson blasted the spot kick over the bar. Burton's joy was short lived as two minutes later Boston went in front. Kiwomya spotted Costello free on the right wing and found him with an inch perfect pass across the full width of the pitch. Costello then whipped the ball into the area and Mickey Nuttell headed home to send the crowd wild. Boston clinched the points when substitute Kevin Noteman rifled home a Stanhope cross with twenty minutes left on the clock. No more goals were scored so the Pilgrims had beaten their nearest rivals and gone ten points clear at the top of the table. The goals from the game can be seen here.

More than three thousand fans then turned out at York Street for the Boxing Day clash with local rivals King's Lynn, but as often seems to be the case for big occasions with big crowds and big expectations Boston lost. The Linnets went in front when Dave Robinson lobbed Paul Bastock from 40 yards out, then a few minutes later they went two up when Lee Wilson broke clear and fired under Bastock's dive. Peter Costello scored Boston's goal from the spot after Mark Rawle had been fouled.

The Pilgrims clinched the league title with three games to go in front of 4137 fans at York Street in their local derby against Grantham. The visitors took the lead in the first minute when Jim Neil cracked a 20 yard free kick over the defensive wall beyond the reach of Paul Bastock. Boston equalised on 27 minutes when Mark Rawle headed home after Paul Raynor had fed the ball back into the area following a corner. In the 66th minute Rawle pounced on a loose ball to get his second goal and to give Boston the lead. Gary Childs extended the lead when he slid the ball home after the Grantham 'keeper dropped the ball following a challenge by Mickey Nuttell and Mark Rawle. 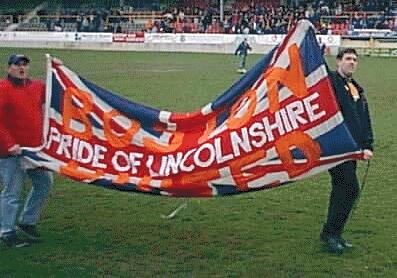 
In their final Dr Martens League home match of the season a week later (against Newport County) it was party time at York Street as the Champions were presented with the Championship Shield. Fireworks were let off, a huge net full of black and amber balloons was released and the squad paraded round the pitch. 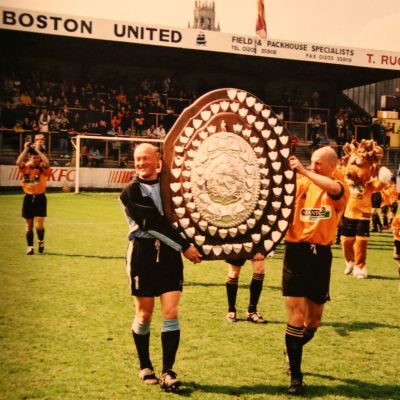