When the fixtures come out each season there is usually one pair of games that come as no surprise as during the Christmas / New Year period it is traditional to have local derbies arranged home and away. Being during the festive holiday period and between local rivals they are often keenly contested and well attended. Indeed, the match is often the highest attended for the season.

The leagues Boston have played in and the local opponents within them have changed over the years. For twelve of their first thirteen seasons - either side of the Second World War - Boston's Christmas opponents from the Midland League were Lincoln City Reserves. Unlike today, many of the games took place on Christmas Day itself as the tradition was to play one game on Christmas Day and the other on Boxing Day. The only exception was the season that took place after the war started when Peterborough United were the visitors to Shodfriars Lane on Christmas Day 1939, which saw Boston come out on top 2-1 with goals from Jackie Moore and Freddy Tunstall.

After the having the same opposition in the 30s and 40s, the 50s and 60s saw different opposition almost every season for the home game over the Christmas period. The only club to visit Boston more than once during this time was King's Lynn. They played in the last Christmas Day game at Boston in 1956 which Boston won 2-0 and again on Christmas Eve in 1960 which ended in a 5-5 draw with Arthur Bottom getting a hat-trick. Boston's highest attendance at home for a Christmas derby was for the match against Peterborough United on Boxing Day 1957. Both sides were vying for the Midland League title and 9288 turned out at Shodfriars Lane to see Boston win 2-1 with goals from Johnny Garvie and Andy Graver. The return match was played on Easter Monday that season and Peterborough got revenge with a 3-2 win in front of a measly 8077 and they went on to finish as champions with Boston in third place.

The 1970s saw Boston in the newly formed Northern Premier League and Gainsborough Trinity became the regular Yuletide opponents. Trinity had the upper hand in the early encounters, and it wasn't until the fourth one at York Street in 74/5 that the Pilgrims recorded their first win, 3-1 on New Year's Day. When Boston switched to the Alliance Premier Football League in 1979 they left Gainsborough behind and the local derby opposition changed. Frickley Athletic and Kettering Town became the regulars. Gates averaged over 2000 and the biggest occurred in 1987 when Lincoln City dropped down to the Conference to provide novel opposition. A turnout of 5822 saw the Imps win 2-1 on Boxing Day.

Following relegation from the Conference to the Northern Premier League in 1993 Gainsborough again provided the Christmas holiday opposition. The switch to the Dr. Martens League in 1998 saw first Grantham Town and then King's Lynn visit. Grantham were beaten 3-0 but the derby clash against King's Lynn yielded no festive cheer as the Pilgrims lost 2-1 with Paul Bastock beaten by an audacious 40 yard lob by Dave Robinson and a shot on the break by Lee Wilson before Peter Costello got one back in front of a bumper crowd of 3119. It didn't set back Boston's progress though as they finished the season as promoted champions.

Lincoln City would win on their second Christmas period derby match when they came to Boston on Boxing Day 2003 with both sides in Nationwide League Division Three. This time it was 1-0 to Lincoln with the only goal being a second half penalty scored by Paul Mayo in a match that attracted the Pilgrims' biggest crowd (5708) since becoming a Football League club.

In their twelve seasons since dropping out the Football League Boston have played Gainsborough Trinity five times, Eastwood Town twice and Stocksbridge Park Steels, Corby Town, Histon, Lowestoft Town and Alfreton Town once each at York Street over Christmas. The gates have dropped to around the 1500 level. 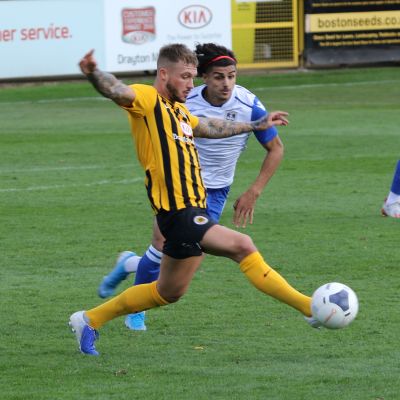