The end-of-season party was a huge success with £1000.06 (before expenses) raised for the popular goalkeeper. Over 150 people attended the event along with Boston United officials and players. Steve Evans, Trevor Quow, Andrew Stanhope, Micky Nuttell, Joby Gowshall, Lennie Curtis, Richard Lucas, Mark Clifford and Colin Hoyle were some of the notable celebrities who were present.

The football quiz was also a success with £98 raised. Placings are as follows:

The latest draw in Bazza's 200 Club draw has been made with Win Spinks winning the £50 prize for April. Ted Walmsley was the £10 runner-up.

Plans are still afoot for a Testimonial match. It is likely that the opposition and date will be confirmed in the near future.

There are also plans to hold an auction before August. The following items will be up for grabs:

The recent collection at half-time of the Hereford United game raised £241.83 for Bazza's Testimonial Fund. Thanks go to all who made a contribution.

Paul Bastock's Big Golf Day took place at Boston West Golf Centre on Monday February 19. The event was a huge success and raised more than £600 towards Bazza's overall Testimonial Fund. Details of winners can be found below:

The positions in Bazza's Big Golf Day were:

The Testimonial Committee would like to extend special thanks to former Pilgrim Ian Stringfellow, who now runs his own golfing business in Mansfield, for providing many of the day's excellent prizes.

Thanks also go to Michael Small Electrical for sponsoring the day and to Rexel Senate and Trust Windows for their continued support as joint Testimonial sponsors.

This took place at the Boston United Social Club on 2nd December. 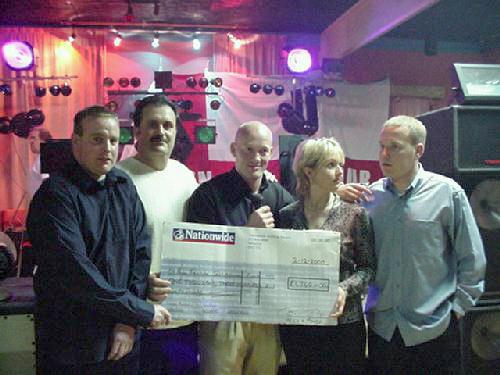 Save the planet and help boost Bazza's Testimonial Fund by recycling your old printer inkjet or toner cartridges. A deal has been struck with www.lmsonline.co.uk. Bring your used cartridges to the Boston United Club Offices 14/16 Spain Place or on matchdays to the Cartridge Recycling Container which is placed near the York Street turnstiles. For every three cartridges brought in for recycling, www.lmsonline.co.uk will contribute £1 to the Paul Bastock Testimonial fund.

Committee members are now also busy trying attract an array of sponsors, prize donors (for raffles or auctions) from businesses, individuals or from the football world in general. Any offers of help can be directed to fund secretary Pauline Chapman on (01205) 363562 or any committee member.

Also a wide array of commemorative merchandise is now being distributed to outlets - including polo shirts, sweat shirts, fleeces, mugs, key fobs, pens, fridge magnets, novelty 'Bazza' clocks, celebration photographs from the 2000 Dr Martens title winning season and hopefully, in the near future, some big synthetic 'Bazza' hands which look like being a big hit with the fans.

As a starting point these will be on sale at the new United souvenir shop and there will also be a full range available for view and purchase at all testimonial functions.

In addition, a special Paul Bastock souvenir brochure is currently being produced and should be on sale by mid-September.

Back to the Boston United Home Page.