Not Only But Also

The football ground at York Street / Shodfriars Lane has been Boston United's home since their formation in 1933. But they weren't the first football club to use the ground and they haven't had exclusive use of the ground either.

If you asked a Boston United fan who was the first Football League team knocked out of the FA Cup at Boston they would probably reply that it was Hartlepool who went down 2-1 at York Street in the second round proper in the early seventies. But that would be wrong. Hartlepool were the first such club knocked out by United at Boston but their predecessor club - Boston FC - had produced the town's first FA Cup giant killing almost half a century earlier in 1925.

Boston's heyday was in the mid-twenties. They had been playing in the Midland League since just after the First World War. They played on fields adjacent to a stand for spectators in the same location as the current ground. In 1925 they brought the first piece of senior football silverware to the town when they won the Lincs Senior Cup. They also had three great seasons in the Midland League finishing as runners-up to Mansfield Town in 1924/5, Scunthorpe United in 1926/7 and in third place behind Mexborough Athletic and Mansfield Town in 1925/6. But it was in the FA Cup that they had their greatest triumphs. In 1924/5 they went further than they had gone before, reaching the fifth qualifying round where they were finally knocked out by Second Division Port Vale 6-1. They had scored 25 goals and conceded 7 in their Cup run. The next season was even better and as recounted in Simon Ashberry's excellent history of Boston Town - "Come and Sit with Us" - they really made a name for themselves, producing Boston's first proper giant killing act - years before United came into existence. In the First Round Proper they beat Midland League rivals Mansfield Town 5-2, just six years before the Stags would be admitted to the Football League. The Boston Guardian reported "Seldom, if ever at all, have there been such wild scenes of enthusiasm and excitement witnessed at a football match in Boston as those at the conclusion of the match on the Shodfriars Lane ground on Saturday. When the final whistle blew, the crowd went mad with delight at the brilliant victory so handsomely and deservedly gained." Better was to come in the Second Round two weeks later when Bradford Park Avenue - leaders of the Third Division (North) - came to Boston. A crowd of 5041 watched the game. The Guardian reported "Long before the time of kick-off, people began to assemble, large numbers coming from the surrounding villages, while there were also contingents from Lincoln, Grimsby, Spalding and even a few from Bradford. Half an hour before kick-off the stand was packed. The people round the ropes were standing four or five deep. They witnessed a great victory with Boston winning 1-0 courtesy of a 10th minute penalty scored by Doran after a Bradford defender had punched away a goal bound header by Boston's Miller. The Guardian reporter commented "Boston well deserved their victory and on the play should have been at least two more goals up. The game they played was the game of their lives and will go down in posterity." In the next round Boston travelled to First Division giants Sunderland - who would finish the season in third place behind Arsenal and Huddersfield - and came down to earth with a bump - losing 8-1. The next season they also came close to beating another League side at Shodfriars Lane - drawing with Third Division (South) side Northampton Town 1-1, but they lost the replay 2-1.


The ground has been used to stage many other events. In the late 1930s greyhound racing took place and the kennels came in useful as they were converted to include baths to be used by the players after the original dressing rooms burned down in 1937. In 1955 the Midland League Championship match between Notts County Reserves and Rotherham United Reserves was played at Shodfriars Lane. 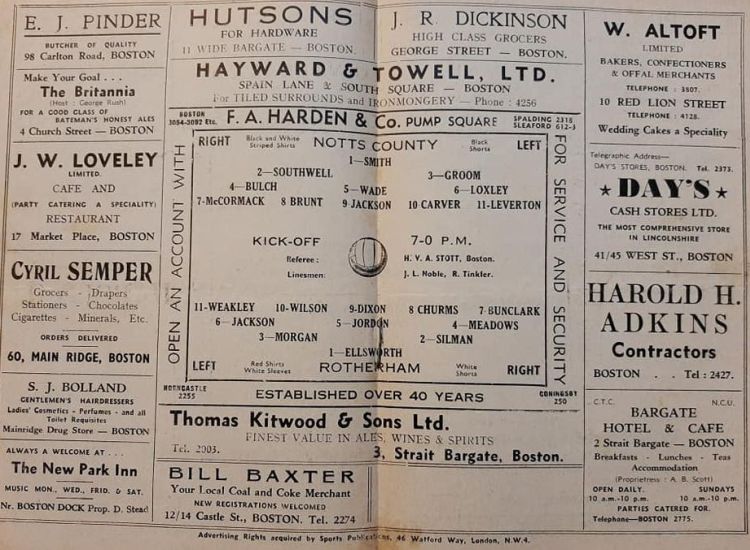 
After being assured that they would be a big attraction, three American Football matches were hosted, but the big crowds failed to materialise. The original Skegness to Boston Seabank Marathon would finish at the Stadium. Car boot sales have been held at the ground in the close season. Local football teams used to play in league and county cup finals - where York Street was their Wembley. In recent years spectacular firework displays on Bonfire Night have proved to be very popular.