There can't be many people who have spent more time at York Street than club President John Blackwell. Since being asked to join the club as spongeman/trainer in 1972 by manager at the time Jim Smith, John has only missed four Boston United games - and only one of those was at York Street. He was appointed full-time Club Secretary in 1976 until retirement in 2016, but has continued his involvement with the club after being made Club President. With so many memories and insights into the running of the club he has been encouraged to write a book to document them. With some help from former local journalist and friend George Wheatman the book has been written. 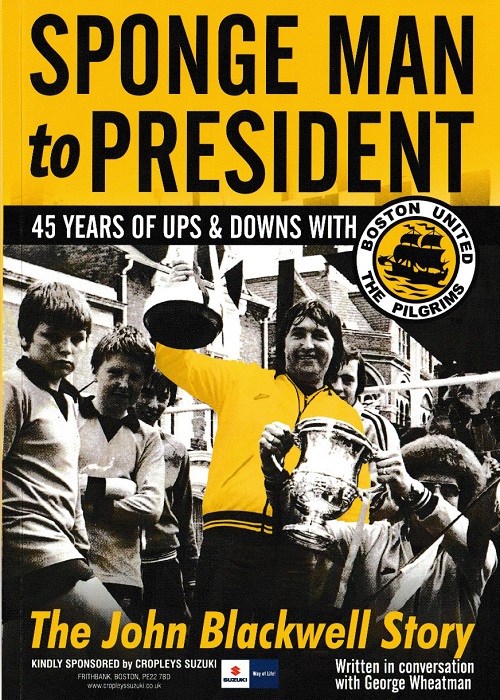 Here are just a few of the York Street stories recounted in John's new book - "Sponge Man to President", which is now available from the club shop.

On being taken to "Shoddys" by his dad.

I have a vague recollection of the first-ever floodlit match at Shodfriars Lane, against Corby Town, which attracted a reported attendance of 11,000. There was also the visit of a Ugandan touring side which stands out because their team played in bare feet. Long-time United supporters will recall that the dressing rooms were at the far end, now site of the Starlight Rooms. Fred Tunstall was groundsman. I remember he "painted" the markings on the pitch with a paint brush.

John's thoughts on the Keith Jobling / Howard Wilkinson partnership in his early days at Boston United.

When Jim Smith left for Colchester in October 1972, he recommended that Howard Wilkinson should take over his role, but the astute Mr Malkinson thought he was too young, and appointed Keith Jobling instead, but asked Howard to assist as player-coach. Together, of course they plotted that famous 0-0 FA Cup draw away to Derby County. When he took over, United were 40 games into a long unbeaten run and, under the Jobling management, they went on to take that run to 51 games. They went on to complete the work Smith had started by clinching the Northern Premier League championship with a 4-1 win at home to Altrincham. Many fans - and I can count myself as one of them - still drool over the end-of-season performances that earned them the non-League Champions of Champions title in matches against Southern League champions, high-profile Kettering Town.

Amongst the many odd jobs John has done at York Street over the years, being a shepherd must be one of the oddest. Here's the story.

During the period that York Street was being re-developed, we had built the Spayne Road and Town End stands but we played without the main stand. Dugouts were on the land where the new stand was scheduled to be built. We decided that, during the summer, we would have sheep grazing the pitch to save the trouble of cutting it. There was a wire fence around the touchline to keep them in. Early one Sunday morning, I received a call from the police to say that our sheep had gone for a walk, someone had taken the fence down. I found them roaming around Field Street and at the side of Eagles fish shop. I had to round them up and drive them back to the ground, and then find someone to help me fence them in again.

It was not always easy for Chris playing for his home-town team, and I remember the usually easy-going Albert Phelan becoming angry at the barracking Chris suffered from some fans during a pre-season county cup defeat against Grantham (in 1980). Albert hit back at these fans in the local Press. "Chris is a lad with potential. He made mistakes on Saturday just the same as any other beginner will make mistakes, but I thought he played quite well. But because of the unfair criticism he was very dejected after the match. I would have thought the Boston supporters would have been delighted that we were giving a chance to a local player. I can't understand them." No doubt those critics would have changed their attitude when Chris went on to become the club's record goalscorer. Another record Chris must have achieved is the number of changes in hairstyle that I have spotted when trawling through my scrapbooks.

There are hundreds of other great stories and memories in the book. It covers all the ups and downs in Boston United's history providing many insights into the running of the club. John's recalls many games including the FA Cup runs and the road to Wembley in the FA Trophy in 1985. He gives his thoughts on all the club's managers during his time there; local players; the physios who followed in his footsteps; and many of the other people who have helped put on the matches over the years. 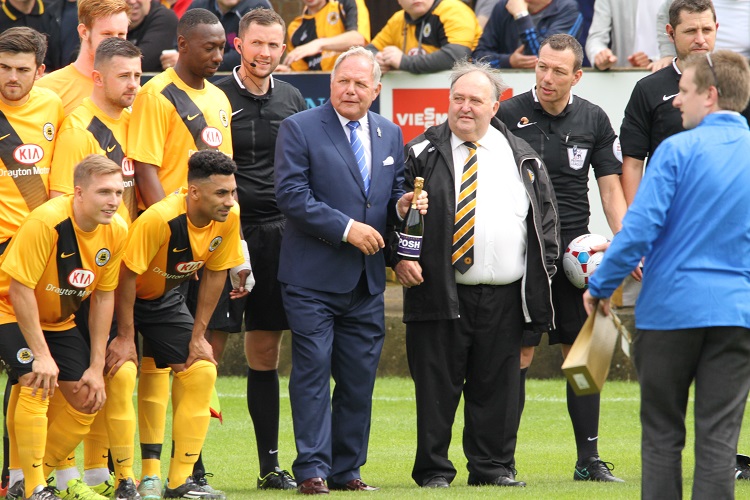 Getting some champagne from Barry Fry at his testimonial in 2016