Tonight's match against Rochdale at York Street will be the 42nd FA Cup replay that Boston United have played. The games are split evenly with half at home and half away. Not surprisingly, given that the first game ended in a draw, the results are also pretty even with seventeen wins, two draws (from the days when replays that ended level weren't decided by extra time and/or penalties but went to another replay) and twenty-two losses. Seventy-six goals have been scored by Boston and seventy-six conceded.

The omens for tonight's game are mixed. In the home replays Boston have only converted home advantage into a victory in nine of the twenty games.

Over the next twenty years Boston only had three FA Cup replays at home and all three were against Grantham. Boston lost 2-3 in 1937 and won 4-1 in 1950 and 1-0 in 1954. In 1969 in the second qualifying round against Bourne Town Boston drew the first game at York Street 0-0 and Bourne then agreed to let the replay take place at Boston to maximise the shared gate receipts. A bumper crowd of 3497 turned out to see Boston win 2-0.

In 1974 there was arguably the biggest ever game played at York Street when First Division title contenders Derby County were the visitors in a 3rd round proper replay after the initial game at the Baseball Ground, like tonight's match, had ended in a 0-0 draw. Despite being an afternoon midweek match due to restrictions using floodlights to conserve energy during the oil crisis, the ground was packed to capacity as many Boston schools closed down to give the pupils a rare chance to glimpse stars from the First Division. The side that Derby brought to York Street contained four internationals. Boston couldn't repeat their first match heroics and Derby got full revenge for their 1955 FA Cup defeat to Boston by winning by the same 6-1 score. Archie Gemmill got a hat-trick, Jeff Bourne a brace and Derby's record breaking £250,000 transfer signing David Nish completed the scoring. Jim Conde got the Boston goal. 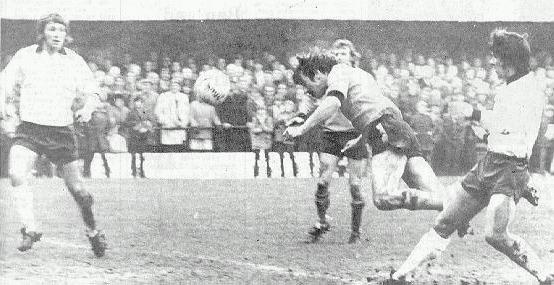 Since then two League One level sides have come to Boston to play in FA Cup replays. The first was Hartlepool United in the third round proper in 2004 after a 0-0 draw at the Victoria Ground. Hartlepool won the replay with a deflected goal off Paul Ellender by former Pilgrim Adam Boyd deciding the tie.

A year later Swindon Town were the visitors in the first round proper after a 2-2 draw at the County Ground. A brilliant first half display saw Boston go in with a 4-0 lead and Swindon down to ten men after their 'keeper had been sent off. But they sat back in the second half and even allowed Swindon a consolation goal via the penalty spot.