The FA Trophy Semi-Final Second Leg match between Boston United and Altrincham on 13th April 1985 is up near the top of most Boston fans' list of their most memorable and favourite matches at York Street. It was a long and hard FA Trophy campaign that season that began with a narrow 2-1 away win in the 3rd Qualifying Round in December at Alvechurch and culminated seven matches later with an appearance in the final at Wembley Stadium against Wealdstone. The first round proper game at home to Blyth Spartans had been particularly dramatic. With fifteen minutes to go, Blyth were leading by four goals to two, but late strikes from Dominic Genovese and Chris Cook brought the scores level, and Cook then slotted home from an acute angle right at the end to take Boston through to the next round.

Boston held the advantage having drawn the away leg 0-0, but things didn't quite go according to plan in the return leg at York Street. Boston had reached the semi-final stage of the Trophy once before, back in 1980. On that occasion they had drawn the away leg at Mossley, only to lose in the home tie. For a while it looked like history would be repeating itself. Initially everything looked to be going the Pilgrims' way. With the wind behind them Boston went into a 2-0 lead by half time with goals from Chris COOK and Bob LEE. To add to Altrincham's problems, they had Graham Bennett sent off with ten minutes of the half remaining. But Altrincham came out fighting in the second half and within a few minutes had pulled a goal back when ELLIS latched on to a long throw in and bundled the ball over the line. With six minutes remaining the unthinkable happened. Jeff JOHNSON scored with a spectacular 30 yard shot after robbing Mick Laverick of the ball. So now with the scores level it looked like ten man Altrincham would be progressing to the final on the away goals rule. With time almost out United won a corner. What followed would become etched into the memory of every Boston fan in the ground. Dave Gilbert placed the ball down for the corner kick then fired it to the far post where Bob LEE rose above the Altrincham defence to head the ball home and send the Pilgrims to their only Wembley appearance.

Club President John Blackwell recalls the end of the match in his new autobiography "Sponge Man to President" - an excellent read available now from the Club Shop. He says: "The tension became too much for me, I could not watch any more and went for a walk around the car park. There I met club doctor, Dr Taffinder. He could not stand it either. Then all of a sudden, there was the biggest roar from inside the York Street ground. We both ran back into the ground to discover that Bob Lee had scored what proved to be the winner with only a minute or so remaining, United fans ran onto the pitch, and it took a few minutes to get them off, before they ran back on again to celebrate getting to Wembley!" 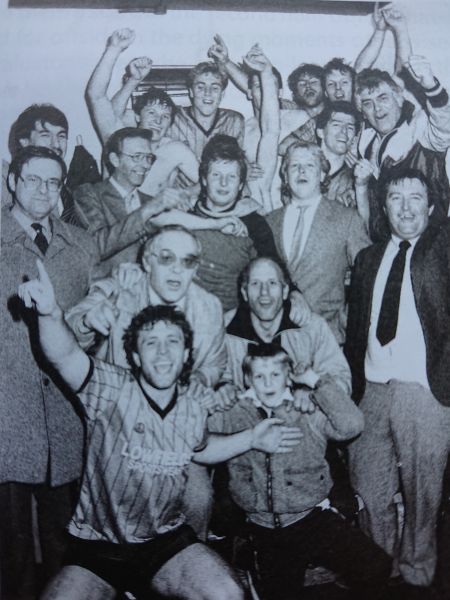 John also noted that United player-manager Arthur Mann showed his admiration for their opponents. "I am full of admiration for Altrincham and the way they fought back. They were magnificent". He also remembered John King their former captain and centre half who had stepped up to be their very successful manager going into the Pilgrims changing room afterwards to congratulate all the lads on their victory.

Boston fan Dave H remembers the game well. On Pilgrims' Patter he has posted: "We were packed like sardines into the York Street end (no Townenders in those days). As with all big games then trouble arrived and Arthur Mann prompted by the police came over to tell whoever was throwing golf balls to pack it in. Obviously, the biggest moment was when Bob Lee rose at the far post and thumped the header in the back of the net. The ground erupted. Boston were off to the twin towers of Wembley!"