Let There Be Light

After attending a floodlit match at Wolverhampton's Molineux as a six year old, the great George Best later said: "It was the floodlights that made it magical for me, it turned football into a theatre". It's a feeling shared by many football fans, me included.

Boston United were one of the pioneers of floodlit football. Before floodlights daylight hours determined kick off times. Even on Saturdays during the winter today's usual kick off time of 3pm would be too late, so from October through to February kick off times would be moved earlier to 2:15pm. There were some midweek games. These had early kick off times of around 5:30pm and could only take place in August, early September and April/May. Although the first floodlit football match took place at Bramhall Lane in Sheffield in 1878, it wasn't a great success and floodlights weren't properly introduced to football until the 1950s. It took the football authorities a long time to sanction their use for competitive matches. The first Football League match under floodlights took place at Portsmouth on 22nd February 1956 against Newcastle United. However a few months earlier, in the Midland League, Boston United had played their first floodlit fixture in their Monday evening game against Corby Town on 3rd October 1955.

Boston United were the first non-league club in the Midland League to install floodlights. They consisted of 44 lamps mounted on eight sixty foot high poles, three on each side and one behind each goal. They had cost Ł3,500 and had been paid for by the supporters' club. Coaches from all over Lincolnshire brought spectators to the match. Organised parties arrived from Lincoln and Skegness. The large crowd broke the ground's attendance record as more than 9,000 people were packed in. Initial reports suggested an even bigger crowd of over 11,000, but it was eventually realised that this figure had been incorrectly calculated by double counting the people in an enclosure inside the ground. The lights were switched on by Mr J Richards - the chairman of the Midland League. Before the switch-on Mr Richards addressed the crowd. He said that he was delighted to be there that evening to take part in the inauguration of the lights which brought a new chapter to the history of the club. Sooner or later, he said, if Boston continued the way they were doing they might find themselves in a higher sphere of football. Playing in new shirts that glowed under the lights, Boston recorded an impressive 5-0 win with goals from Vic Walker, Jimmy Bloomfield(2), Jimmy Whitfield and Reg Harrison.

Clearly the floodlights were a major attraction, so Boston began to arrange additional floodlit games to make the most of them. A series of floodlit friendlies against Wrexham brought in crowds in excess of 5,000. Then a floodlit competition with Southern League champions Yeovil Town was organised for three seasons. With both teams having floodlights, home and away fixtures were played and Boston won the accompanying Yeovil Supporters' Club Cup each time.

When Chelsea signed up Boston United teenagers Gordon Bolland and Michael Robinson just before Christmas in 1959, Chelsea agreed to send a strong team over to Boston to play in a floodlit friendly match to supplement the small fee involved in the transfer. So on Monday 14th March 1960 chairman Joe Mears and manager Ted Drake brought a Chelsea side up to Boston containing nine players with first team experience. Chelsea won the match 4-1 in front of a crowd of 3257. 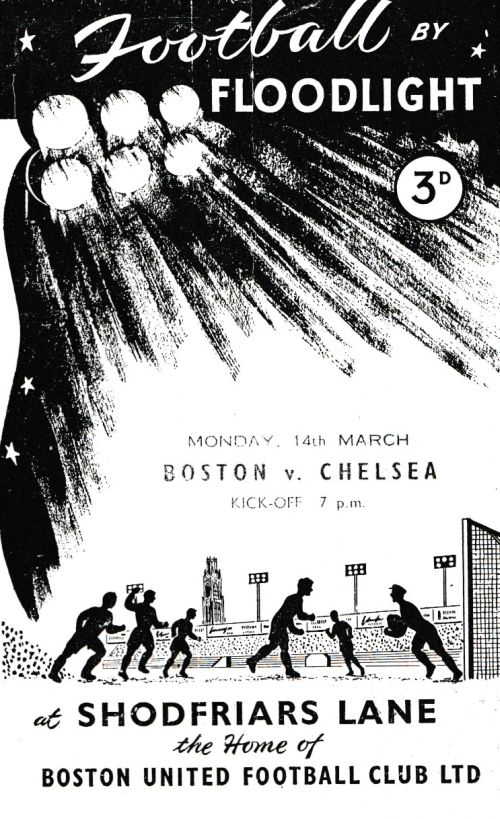 Later in the late 60s and early 70s there was the Eastern Professional Floodlit League and Cup which Boston won in 1971/2. After a 0-0 draw in the final first leg at Romford they won the second leg at York Street with goals from Alan Pilgrim, Bobby Svarc and Cliff Wright.

Over the years the floodlights have been replaced and upgraded. In 1967 the 100ft high four corner tower set that is still used today was installed to replace the original set that had fallen into disuse. They cost Ł20,000 and were first used in a West Midlands League match against title rivals Kidderminster Harriers on Wednesday 25th January 1967 in front of a crowd of 2777. Boston lost the match 2-1 but went on to win the title.

A further upgrade to the floodlights occurred in 1981 when the ground was virtually entirely rebuilt to bring it up to Football League standard. Then following promotion from the Dr Martens League in 2000 the floodlights were brought up to the lux standard required for the Nationwide Conference. Replacement floodlights were funded via the Floodlight Repair Scheme. In this initiative supporters pledged a sum of money for one of the old floodlight bulbs and those who pledged the highest amounts received one of the old bulbs as a souvenir. There were twelve 2000-watt floodlights on each pylon. The new floodlights were first used against Yeovil Town on Wednesday 13th September. Boston added to their successes against The Glovers under floodlights with a 4-1 win with goals from Paul Wilson(2), Mark Rawle and an injury time own goal by Paul Steele failing to deal with a punt upfield by Paul Bastock.