The vast majority of Boston United's home games have been in English competitions so the opposition has been almost entirely English with a smattering of Welsh. However, a few foreign teams have visited over the years, albeit for friendly games rather than competitive fixtures.


BOSTON UNITED 3-8 POLISH AIR FORCE XI 19th January 1946
When the Second World War ended, it took a while before football in England got back to normality. The Football League didn't start up again until the 1946/7 season, but the Midland League commenced at the start of September 1945 just days after Japan surrendered. Only 19 teams entered the league, so this left some Saturdays free in schedule. A friendly match against a Polish Air Force XI filled one of these free dates. There were some familiar faces in the Polish team. Cieplinski had been playing for Boston before being picked for the Polish side and Pawlow had been turning out for Peterborough United. The Poles' centre-forward Wolanin had been working in Russia before the war and had played several times for the Dynamo side. It soon became apparent that the Polish side was a class above their Midland League opponents. Their skill, tenacity and speed made the Boston team look slow in comparison. The Poles went in front when Wolanin beat Boston's keeper from short range - it was the first of four goals he scored. Cieplinski got a couple and Pawlow and Majeran completed the scoring for the Poles. Boston's goals were scored by Harry Sharp (2) and Bill Pate to give the visitors a victory by eight goals to three. The attendance was 2,300.

BOSTON UNITED 2-3 BERGEN-OP-ZOOM 24th August 1946
Another Dutch side came to Shodfriars Lane to play a friendly match in August 1946. This time it was Bergen-Op-Zoom. A pair of games were played with the first one being in Boston in 1946 and the return match the following summer. Boston lost the home match 3-2 but won the away match 5-2.


BOSTON UNITED 0-1 GAK GRAZ 22nd April 1954
Towards the end of the 1953/4 season Boston United arranged a friendly match against GAK (Grazer Athletik sport Klub) - an Austrian side from Graz who were touring Great Britain and Ireland. GAK played in the top division in Austria and had finished the season in fourth place. Their side contained four Austrian internationals. Boston had sought donations from local supporters to raise money to cover the extra expenses necessary to arrange the match. A total of £23 10s 0d was raised, and in addition to the money a Mr Tomlinson of Boston donated a live pig to the fund. A special souvenir programme was produced for the event. Unusual for the time was that substitutes were allowed. The game provided excellent entertainment. As the game drew to a close the Austrians scored the only goal of the night. A GAK attack developed and Engel was put in the clear and he lobbed the ball high over Ray Middleton into the net. There was some debate as to whether he scored from an offside position. The attendance was 4,446. 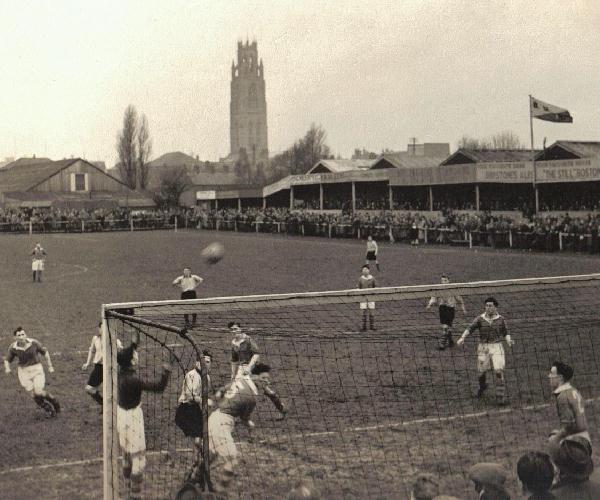 
BOSTON UNITED 6-1 UGANDA FA XI 12th September 1956
In 1956 Boston United took on a touring side from the Uganda FA XI. The game was played under floodlights, something of a novelty at the time as they had only been installed in Boston a year earlier. Some of the Ugandan team preferred to play barefooted, but the heavy Boston pitch precluded this option for all of the side apart from their left winger Kalibala. The "pen pictures" of the Ugandans in the match programme gave each player's tribe as well as their occupation. The Ugandans were very quick, eager and tireless. Their attacking moves were well schemed but their passes often fell short, being held up on the muddy surface. They showed a fine understanding of the game but were not able to take advantage when they made an opening. Boston's goals were scored by Johnny Birkbeck(3), Reg Howlett, Geoff Hazledine and an own goal by Seruwagie. The Ugandans only goal was scored by Temaligwe from the penalty spot.

BOSTON UNITED 2-2 LAVAL 16th October 1958
In 1958 Boston became one of the first towns in England to be twinned with a French counterpart when they began their association with Laval. The twinning agreement was signed in June 1958 by the Mayor of Boston, Councillor Cyril Valentine and the Mayor of Laval, Monsieur Le Basser. A football match between the two towns was soon arranged. Boston fielded a side with a couple of guest players - Martyn King from Colchester United and Ron Barnes from Blackpool. Both were doing their National Service nearby at RAF Cranwell. The game ended in a draw with Boston's goals being scored by their guest players. The Laval goals were scored by Gaumer and Leguy. The twinning arrangement is still going strong. Another football match between the towns' two sides is however long overdue!

BOSTON UNITED 3-3 BAKILI BULLETS 19th July 2003
There was no shortage of entertainment as Boston United shared six goals in a York Street pre-season tussle with Bakili Bullets who had just clinched their eighth Malawian championship title in the previous ten seasons. The visitors contributed to a see-saw encounter which ultimately finished all-square thanks to a last-minute Boston equaliser from Graham Potter. The Bullets proved skillful opponents, but also packed a few heavy challenges which seemed a little out of place in a pre-season friendly. Bakili's goals were scored by Fisher Kondowe, Kondwani Numdwe and James Chilapondwa (pen). Boston's goals were scored by triallist Scott Brough, Neil Redfearn and Graham Potter. The attendance was 777. 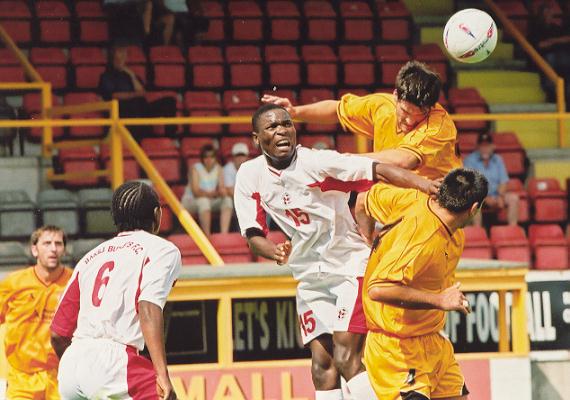