With their win at Hednesford last weekend Boston United reached the first-round proper of the FA Cup for the first time as a non-league club since 1997. Good runs in the FA Cup in recent years have been rare, but it hasn't always been the case. In fact in terms of percentage of FA Cup games won, Boston United have one of the best records of any club with 53.5% which is up there with the likes of Everton (54%), Liverpool, Arsenal and Aston Villa (52%), Manchester United and Tottenham Hotspur (51.5%).

The only disappointing aspect of this season's run is that all the games so far have been away, as is the first round one at Carshalton Athletic. So, Boston's final FA Cup game at York Street may end up being the embarrassing 2-0 defeat to Peterborough Sports last season. York Street has however seen many fantastic FA Cup games since the first one in the first qualifying round against Newark Town in 1934. That was a 6-2 win in front of a crowd of 2536 with the goals being scored by Frank Bungay(3), Eddie Munnings, Billy Marshall and Pat McConnell. Overall to date York Street has hosted 135 Boston United FA Cup games with 78 wins, 21 draws and 36 defeats with 359 goals scored and 189 conceded. Boston's York Street FA Cup hot shot is Chris Cook who has scored 17 of his 21 FA Cup goals at the home stadium. There have been two double digit Boston wins - 10-0 against Bilsthorpe Colliery in 1937 and 10-1 against Sudbury Wanderers in 1996. The biggest defeat was 14-0 against Spalding United in 1964 in the season that the Boston United name was being kept alive by a team of local amateurs after the club had almost gone out of existence due to financial woes.

In the 1950's Boston United had their famous 6-1 victory at Derby County but they also had narrow defeats against Football League opponents at York Street going down 2-1 against Oldham Athletic in front of 7914 in 1952 and 2-0 against Bradford Park Avenue in front of 8794 in 1956.

In 1968 Orient were the big-name opponents who came to York Street for a second round proper match. Boston drew 1-1 with their equalising goal being an own goal after a cross by Brian Clifton was put into his own net by Brian Wood under pressure from prolific United striker Jimmy Rayner. The crowd was 7110.

The 1970s were Boston United's glory years. As well as the four NPL titles won there were also a whole host of great FA Cup games at York Street. In 1970 York City visited. Brian Bates gave Boston the lead just before half time, but York equalised in the 80th minute and in a moment of madness defender Billy Howells flattened Brian Swallow to give away a penalty and provide York with an undeserved win. The next season Fourth Division Hartlepool United came to Boston in the 2nd round proper and goals from Jim Smith and John Froggatt were enough to give the Pilgrims another League club scalp and progression via a 2-1 win. The 3rd round brought Second Division Portsmouth to York Street and the 8300 supporters packed into the ground saw Boston go out by the narrowest of margins in a 1-0 defeat. 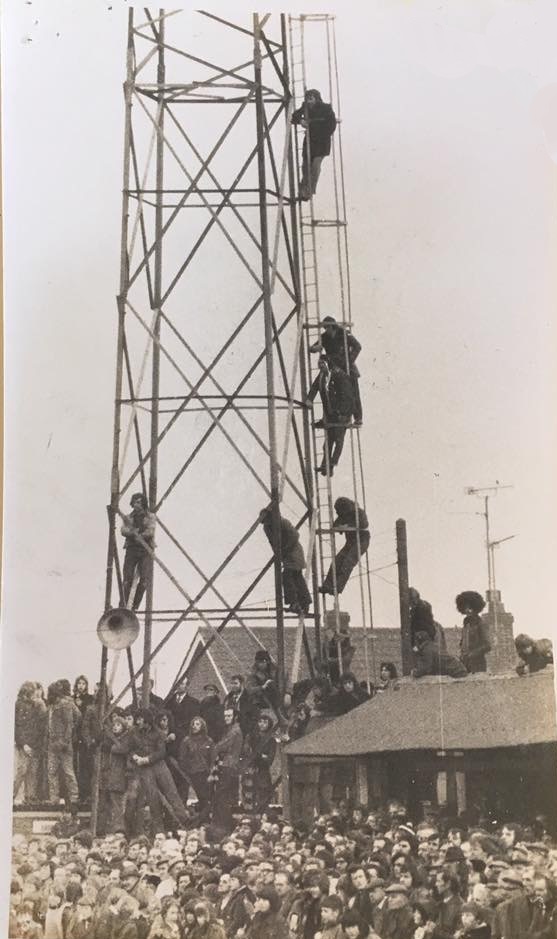 In 1974 there was arguably the biggest ever game played at York Street when First Division Derby County were the visitors in a 3rd round proper replay after the initial game had ended in a 0-0 draw at the Baseball Ground. Despite being an afternoon midweek match due to restrictions using floodlights to conserve energy during the oil crisis many Boston schools closed down and the ground was packed to capacity. Boston couldn't repeat their first match heroics and Derby got full revenge for their 1955 defeat by winning 6-1. Jim Conde got the Boston goal.

In 1982 Crewe Alexandra became the next Football League scalp when they were beaten 3-1 at York Street in the first round proper, the Boston goals being scored by Jim Lumby and two from Boston's 20 year old striker and groundsman Chris Cook. In the second round Sheffield United were the visitors and Boston managed a 1-1 draw. The crowd was 5729. Highlights of the game featured on the BBC's Match of the Day and included an interview with Chris Cook. This can be seen on YouTube at: https://www.youtube.com/watch?v=csywbk72MEM Since then big FA Cup games at York Street have been scarce. The best are probably the first round proper win against Morecambe in 1996 with goals from Leroy Chambers (2) and Steve Chambers and the 4-1 win against Swindon in 2005 with goals from Julian Joachim(2), Brad Maylett and Jason Lee.