There have been many memorable matches at York Street over the years. Some have been in the FA Cup or FA Trophy where the prize would be the glory of beating illustrious opponents. In others, silverware has been at stake. Before the formation of the Alliance Premier Football League in 1979 the best non-league divisions in England were the Northern Premier League and Southern League. Fans wanted to know which of the two leagues had the best side, so a challenge match was arranged after the end of each season to pit the champions against one another. It was formally called the Inter League Challenge Cup, but soon became better known as the "Champion of Champions Trophy" and was played for over home and away legs. Boston United won the Northern Premier League four times in the 1970s so they had four goes to be crowned as the best non-league side in the country.

The first try came in 1973 with the matches being played just days after the sides had won their respective leagues. Boston United had won the Northern Premier League nine points clear of Scarborough and ten points ahead of Wigan Athletic and Altrincham. Big spending Kettering Town had clinched the Southern League Premier Division with a 2-0 win over Barnet and finished one point clear of runners-up Yeovil Town. Kettering had ambitions of joining the Football League. They were led by player-manager Ron Atkinson. He had signed Roy Clayton from his old club Oxford for a then record Southern League fee of £8,000 and also spent £2,000 to get striker George Cleary from fellow Southern League rivals Bedford Town.

In the first leg at York Street on the Monday night Boston put in what Standard reporter George Wheatman described as "the best York Street performance I have seen from a United team in the eight seasons I have been covering their matches." Boston suffered an early set back when a pass in midfield by John Moyes was intercepted allowing Kettering to break forward quickly and Clayton scored. Four minutes later Boston equalised. A cross by Phil Waller was knocked down by Jim Conde to Alan Tewley whose fierce deflected shot went into the net. In the 22nd minute player-coach Howard Wilkinson's shot was knocked over the crossbar by the hand of full back Roger Ashby. Cliff Wright scored from the resulting spot kick. In the second half Boston's third goal came when another cross was knocked down by Conde for Tewley to slam home. In the 89th minute Wilkinson scored after good work by Waller and Tewley. In the second leg three days later Boston confirmed their superiority with a professional 2-1 win at Rockingham Road. Kettering had taken the lead with a penalty by Ashby after Dick Bate had brought down Webster. Boston soon equalised when Waller deceived 'keeper Dick Dighton with tantalising shot cum-cross. Six minutes from the end Boston won a spot kick when O'Kane fouled Wright, who got up to convert the penalty. 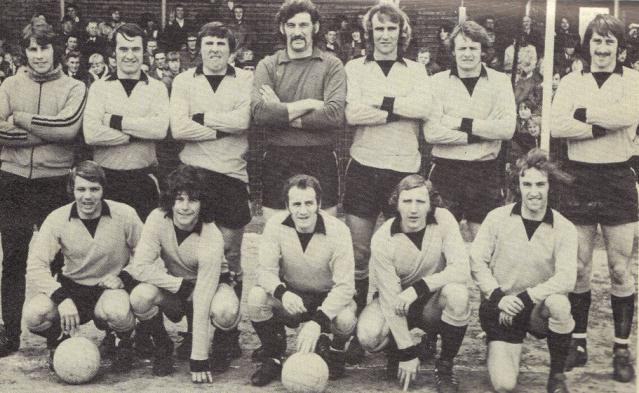 Boston won the Northern Premier League again the next season. This time however the game was held over to the following season and the Boston side was rebuilding after being depleted over the summer by the departures of Jim Conde, John Froggatt, Matt Tees and Malcolm White. They came up against Dartford. The first leg was away and Boston lost 3-1 and in the return at York Street they could only draw 2-2 with goals from Mick Walker and Dick Bate.

When Boston United won their third Northern Premier League title in 1977, the Southern League was won by Wimbledon. Wimbledon were then voted into the Football League, whereas Boston United failed in their application as York Street was deemed as being below the required standard. The first leg in the Challenge Cup was played at Plough Lane. The star of the Wimbledon side was their goalkeeper Dickie Guy. He had come to prominence three years earlier when Wimbledon held Leeds United to a 0-0 draw at Elland Road in the FA Cup. Another familiar name in their line-up was central defender Dave 'Harry' Bassett who would later become manager of the club, lifting them from the Fourth Division to the First Division in four seasons. The match ended in a 1-1 draw. Boston fell behind to a lucky goal by John Leslie, whose miscued shot looped over Gerry Stewart. But Boston fought back and substitute John Moyes levelled the scores with a diving header with his first touch of the ball. In the second leg Boston dictated the play through the controlled midfield work of Dave Poplar, John Moyes and Bob Hosker and some fine attacking moves by Brian Bates and Jim Kabia. Boston took the lead on the stroke of half-time. Hosker rifled an angled drive goalwards and Guy could only parry the effort into the path of Kabia who tapped home. In the second half Hosker, Bates and Kabia all made Guy earn his keep to ensure that Boston didn't increase their lead. The match finished 1-0, so Boston won the Cup for the second time.

In 1978 Boston won their fourth Northern Premier League title so they had their final crack at the trophy. Their opponents this time were Bath City. Boston appeared to be cruising towards victory after an easy 2-0 win courtesy of goals from Jim Kabia and Neil Callery at York Street in the first leg, but they went down 4-1 in the return.