After knocking out Derby County by a record score in the previous round, Boston were rewarded with a match against First Division giants Tottenham Hotspur at their White Hart Lane ground. Five years previously Tottenham had won promotion to the First Division, then in the next season the First Division title. This season they had not been doing so well. At the time of the FA Cup tie they were three places from the bottom of the table, but they remained one of the most colourful and richest clubs in the Football League. Tottenham's captain was the footballing legend Danny Blanchflower, who had joined Tottenham from Aston Villa in 54/5 for a fee of £30,000. Born in Belfast, Blanchflower was also captain of Ireland and would lead Tottenham to the League and Cup double in 60/1. A recent newcomer to the team was forward Bobby Smith who had signed up a fortnight earlier from Chelsea in a £20,000 deal. Smith had made his debut for Chelsea in 1950, aged 17. He would later go on to make fifteen appearances for England. Another Tottenham player who would go on to play for England was Maurice Norman who was regarded as a clever constructive back and a hard tackler. Other internationals in the side included George Robb, a fast goal scoring winger, who had made his only appearance for England in the match against Hungary at Wembley in 1954, Mel Hopkins who made thirty four appearances for Wales, and Johnny Brooks who would go on to play three games for England. Tottenham were managed by Jimmy Anderson who had been with Spurs as a player, then as an official for fifty years.

The match started with two good chances for United. First a terrific shot from Howlett was saved beautifully by Reynolds, then Birkbeck beat the keeper only to see the ball run across the goalmouth inches wide of the post. After half an hour Spurs changed tactics and started playing the ball out to the wings more. This soon brought them some goals. New signing Bobby SMITH got the first when he only had to steer the ball into the net after a shot from Johnny Brooks had rebounded off the post to his feet. The second goal came just before half time when DUQUEMIN picked up a pass from Brooks and fired his shot past Middleton from the edge of the area. At the start of the second half United forced a succession of corners. Then Spurs won a free kick on the edge of the United area. Duquemin made to kick the ball, stepped over it, allowing Blanchflower to knock the ball sideways to Dulin. Dulin then centred to SMITH who headed the ball out of the reach of Middleton into the net. Despite further pressure from United it was Spurs who scored the final goal of the game when ROBB headed home in the seventy eighth minute. Reg Harrison saw a shot hit the bar in the dying seconds of the match.

Spurs went on to reach the semi-final of the Cup, losing 1-0 to the eventual winners Manchester City. They also finished in eighteenth place in the League, just two points clear of the relegation zone.

Free Lance in the Boston Guardian "Boston were magnificent. In their hour of glory Boston United left their mark on a page of football history. Although defeated, they rose to the occasion, and there was not a man present, United or Tottenham, who was not prepared to sing the praises of a gallant eleven men who had suffered defeat at the hands of the illustrious Tottenham Hotspur. The "country cousins" from Lincolnshire, playing on a pitch which resembled some of the best ploughed fen land, the United showed mighty Tottenham that they were capable of playing good football which at times had the Tottenham defence in a panic. Lady Luck, that fickle jade, was not smiling on the United and there was no cavalling at the general opinion that the score greatly flattered Tottenham. On the play the United did not deserve to lose by four goals to nil."

Tommy Lowder "Their ground looked good, but when you got to it, it was like slush! I still don't think their first goal was a goal. We thought that their centre forward Bobby Smith, who went on to play for England, was off-side when they scored their first goal. We gave them a good game, but they got the breaks."

Reg Howlett "In the first half we were holding them. We didn't play badly at all. If we could have got a goal, we would have beaten them."

Joe Hulme - ex Arsenal footballer "I thought Boston had the much better of the opening stages. They were very quick to tackle and their speed often left the Spurs defence standing. I have seen far worse sides in the First Division."

Jimmy Anderson "They certainly deserved two goals. Boston should never have been two goals down at half time."

Free Lance in the Boston Guardian "Before going any further it would not be proper to go on without mentioning Dave Miller. Undoubtedly Man of the Match, and for my money the best performance of any player of both teams. He enhanced an already brilliant soccer career with a performance which inspired the United even when everything looked lost and he well deserved the high praise accorded him by home and away fans alike." 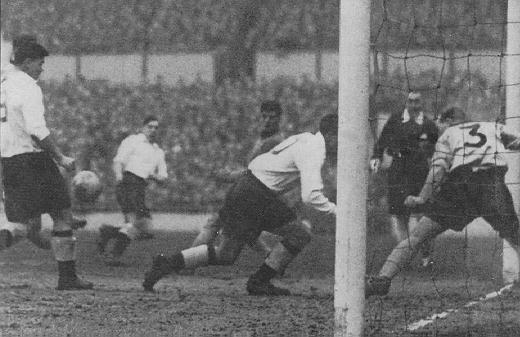 Geoff Snade clears off the line as Bobby Smith runs in