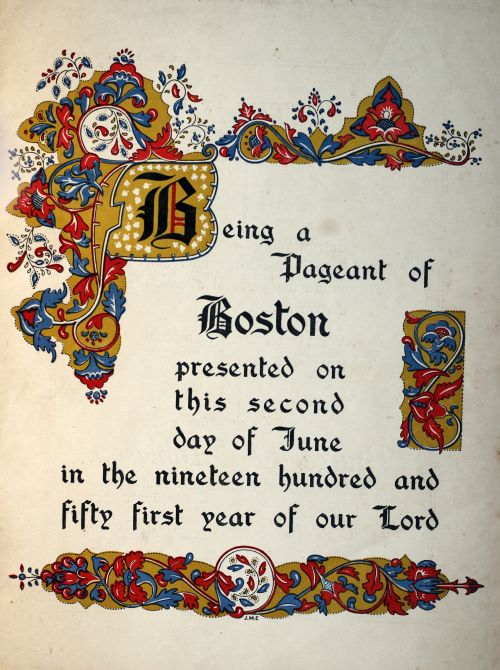 
The report on the Pageant in the Lincolnshire Standard the following week had much praise. It noted that the pessimists who had doubted Boston's ability to present a pageant worthy of the name could not have been more wrong. That everyone who contributed to the memorable performance could be happy in the knowledge that their efforts produced a spectacle which was both outstandingly successful and a truly magnificent send-off for the town's Festival celebrations. In the general smoothness of its running, its cohesion, and its colourfulness, it paid eloquent testimony to the many hours of devoted work its numerous helpers and players had given. One of the best staged scenes saw a most realistic train arrive and its gaily clad passengers alight to receive a civic welcome by the Mayor and the Chairman of the Great Northern Railway. Another scene which really riveted the attention of the audience was some contrasting aspects of modern education - school children from the town and districts demonstrating P.T. exercises, singing the "Lincolnshire Poacher", staging Morris and sword dances and so on. Here for a brief spell was action, variety and life. The actions spoke for themselves; no words were needed. Here was true pageantry.

Not everything went quite to plan as backstage notes revealed. Some real injuries occurred in the fights between the Saxons and Danes performed by the boys from North Sea Camp; a Redcoat firearm went off ahead of time before the confrontation with the Fen Slodgers performed by the Boston Grammar School; and in the evening an aircraft due to circle over the ground arrived ten minutes early and drowned out the recital of Jean Ingelow's famous poem "High Tide on the Coast of Lincolnshire".

A Paramount Newsreel film of the Pageant was shown at the Odeon Cinema the following week. There is also a 16 minute 16mm b/w film called "A Boston Story" that includes coverage of the Pageant in the Lincolnshire Film Archive.